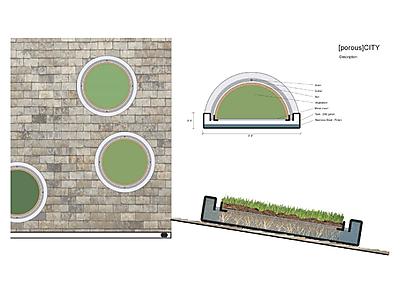 Currently there is a lot of buzz over green roofs, ranging from business owners such as restaurants wanting to grow their own herbs or vegetables to homeowners wanting to expand their gardens onto their roofs. There is only one large problem: existing roofs are currently designed to shed water (i.e. weight) from the surface as fast as possible. This makes for converting entire roofs into green roofs next to impossible because of the weight of the soil and water stored to grow the vegetation. Our solution to this problem is to install small-scale self-sufficient system that could be carefully deployed to a few smaller areas onto any roof.

The system works by collecting rainwater during a storm then holding it so it can water the plants. The system is designed in a series of layers. The top layer is vegetation with plants that have been selected for the ease of care, below that is the soil, which holds nutrients and water. A metal mesh membrane holds the soil above the water tank but allows for roots to get down into the water. These layers are all surrounded by a gutter system, which moves and holds water overflow until it makes its way through the water traps into the tank.

Since the system works on several scales it can reflect the individual owner of the building and catering to the neighborhood characteristics by the variation in plants and layouts used through out the city. It’s the same scaling effect that unlocks the true potential of this system that as more and more people start to add this system to their roofs, the more water that is being stored instead of being diverted to the sewer system. Allowing the community to work together as a whole to capture storm water starts to reduce the amount of large-scale infrastructure interventions that have to be constructed by the city.

In a Porous City everyone’s involvement is counted on to reach the goal to reduce flooding and using the city’s resources most valuable recourse; water, for economic advantages. In the case of the Suitcase Gardens it meets both of those goals and moving foreword there will be more developments, which will lead to additional advances.